The island of Gavdos

The island of Gavdos lies in the Libyan Sea at about 30 kilometers south of Hora Sfakion. It is the southernmost piece of land of Europe. The island is 7,400 hectares in size and is permanently inhabited by about 40 people. The capital of the island is Kastri and except for the port, called Karabe, there are two other villages on the island, called Vatsiana and Ambelos. 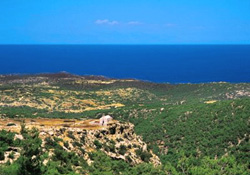 Old findings prove that the island was already inhabited from about 3,000 years before the beginning of our era. Over the years, the name of the island has changed several times. Some people think the island was previously called Ogygya where the nymph Calypso would have lived. Later people called it Cavdos, Clavdos, Clauda and Clavdi. The Venetians called it Gotzo, probably after the Maltese island of Gozo. In the first Byzantine period many people lived on the island, but during the Venetian period the Byzantines left, and the island became a pirates' nest.

Because there is little rain on Gavdos, there is little water available to tourists. This despite vain efforts by the government to tap water from the ground. In the driest periods, there is sometimes no water to shower, for example. Likewise, Gavdos doesn't have its own power supply. All the energy is generated by generators, which at night are often shut down. In Kastri you'll find the only post office on the island. You can also find a card telephone and a medical centre in Kastri. There is a police office with only one officer on the island. The officer happens to be the captain of the boat between Paleohora and Gavdos also.

There are some restaurants where you can eat. The products which are offered mostly come from the sea around the island. At Sarakiniko Studios (http://www.gavdostudios.gr) you can stay overnight. It lies at Sarakinikos beach which is at a 20 minutes walk from the harbor of Karabe. At Sarakinikos beach you can also find the best (lobster) restaurant. There's also a camping nearby.

Almost every day, but only if the weather permits, a very noisy boat sails from Hora Sfakion to Gavdos. This boat trip takes about two and half hours. Hora Sfakion is best reached by bus from Chania.