One of the most famous monasteries of Crete is the sixteenth-century Monastery of Arkadi. It is located 23 kilometers southwest of Rethymno and is built in the Venetian style. Actually it looks more like a fort than like a monastery. It was mainly used for the accommodation of refugees. The monastery was founded in the Byzantine period by a monk named Arkadios. The monastery was named after him. 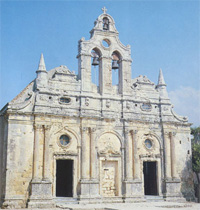 The monastery was known for an event on 8 and 9 November of the year 1866. The Ottoman (Turkish) oppressors wanted to put an end to the resistance that was organized from the monastery in rigorous manner. Therefore he'd send an enormous amount of troops to Crete. The Pasha of Rethymno had threatened to bomb the monastery into the ground if the revolutionist monks would not leave. In response approximately 650 civilians and 259 armed men who took shelter in the monastery prepared for a fight against the Turks. 15.000 Turkish troops besieged the monastery. In the course of the fight it proved to be impossible to maintain the monastery. The refugees decided that they would rather die than they surrender to the Turks. They agreed to stab fire to a warehouse full of gunpowder. This was done by Costis Yiamboudakis, the leader of the resistance fighters, from the village of Adele. The subsequent explosion killed many refugees and a large number of Turks. According to official figures 864 Cretan people died from the consequences of the explosion, while more than 1,500 Turks died. 114 Cretan people were imprisoned and only 3 or 4 people managed to escape.

Despite the heavy losses the Cretan people were the moral winners of the battle. The Monastery of Arkadi is still seen as a symbol of protest and aversion against anyone who tries to suppress the Cretan people.