Eleftherios Venizelos was the first independent prime minister of Crete and the main Greek head of state of the first half of the twentieth century. He was born on Crete in the place Mournies on August 23, 1864. 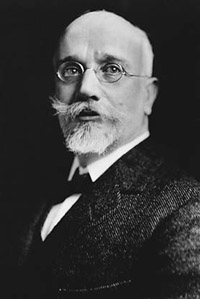 Venizelos spent his childhood on the island of Crete. After that he studied law at the University of Athens. After completing his education, he became leader of the Liberal Party of Crete. At that moment, Greece was still part of the Ottoman (Turkish) empire. As political ringleader Venizelos plays a big role in the struggles of the Cretan independence movement in the fight against the Turks. Therefore, he was appointed as the first president of independent Crete, in 1905.

In 1909 Venizelos departs to Athens at the request of the military rulers of Crete. In Athens they see Venizelos as a leader for the political reformation of Greece. With a lot of enthusiasm Venizelos was appointed as prime minister of Greece in 1910. In the first term Venizelos performs a lot of reforms in many areas. He changes things related to army and finance, but he also amends the constitution.

In 1913, Crete formally became part of Greece. Also, through many wars at the Balkan the Greece territory grows. The population of Greece doubles. The contacts with the royals are good. King Constantine I (1868 to 1923) follows King George I (1845 to 1913), after George was killed by a mentally ill person in 1913 was.

In August of 1914 the First World War broke out. Venizelos wanted to choose the side of the "Entente" (England and France) and Russia to join the war against Germany and Austria-Hungary. He gives consent to the Entente to land in Thessaloniki. The Entente troops occupy large parts of Greece. But King Constantine wanted to remain neutral during the war. He suggested a government of puppets who do what he says. Venizelos departs back to Crete. From there, he founded a provisional government that seated in Thessaloniki. He is supported by the allies. Riots break out between the King's army and the troops of Venizelos in November of 1916. When Venizelos prepares a march on Athens the pressure on King Constantine I becomes to high, leaving him no other option than resign, which he did in June 1917. From that moment on Venizelos is again the political leader of Greece.

After Greece ultimately shares behind the allies the truce follows. Greece did expect to get large parts of Bulgaria and Turkey. This, they did not. Therefore, the Greek army occupied the areas where it feels to have the rights to.

In 1920, the popularity of Venizelos and his party decreased. He lost the election in December of that year. The new government is pro monarchy and King Constantine I returned from exile. However, after the defeat in the war with Turkey in 1922 he had to leave again.

In 1924, Venizelos returns to power. During the reign from 1928 to 1932 his government executed a major modernization in the economy and education in the country. He also concludes peace with Italy, Yugoslavia and Turkey. As a result of new monarchic feelings in the nation Venizelos had to resign in 1933. He intended to stop his politic career. But in 1935 uprisings against the monarchy break out again. In order to support the rebellion, Venizelos tries to return to politics. He supports the armed uprising against the regime. The rebellion, however, was precipitated by General George Kondylis and his troops. This forced Venizelos to flee. He searches and receives asylum in France.

In the place Chalpea on Crete you can still find the residence of Venizelos. It can be found at the Eleutherios Venizelos Square and it is still in possession of the Venizelos family.